Cultures all over the word have harnessed the power of chillies in their cuisine. All over Asia and the Americas, these flavours are extremely common.

But when the heat is too much… Milk!

Milk is the one thing that can save me. But why? Why are milk, cream or even alcohol well known remedies for calming the heat?

The heat is due to the presence of molecules like capsaicin and no matter how many gallons of water you’re drinking, it won’t help reduce the heat at all..

Lets work out why and take the heat out of this problem.

Edible fats and edible oils are esters which are extremely common in our diet. They can be vegetal such as Olive, rapeseed or palm oil, or animal like lard and cod liver oil. These esters are formed from a very specific alcohol called Glycerol (or propane-1,2,3-triol). Thanks to its three hydroxyls group OH, it can react by condensation with three carboxylic acid molecules also know as “fatty acids”.

The properties of the fat or oil will depend on the structure of the long chains of carbons attached to these fatty acids. Indeed, if you’ve ever picked up any nutrition label at the back of your favourite food, you must have heard of saturated and unsaturated fat. This is an indication of the presence of double bond on the carbon chain:

If at least one double bond is present in the fatty acid, the fat or oil will be called unsaturated. You can quickly test to see if an oil is unsaturated as the presence of double bonds will easily discolour a Bromine solution by an addition reaction. Double bonds will give a certain rigidity to the fatty acids which will not be able to pack closely. The more double bonds are present the lower the intermolecular forces (or) will be, the lower the melting point will be. This is why oils such as olive oil are liquid at room temperature. Oleic acid has 18 carbons with a double bond on the 9th. By the way, that’s where the name “Omega” 3, 6 and 9 branded on some oils come from. It refers to where the double bond is.

If the fatty acid does not present any double bond, it will most likely be found in fat and it will be called saturated. Because of the lack of double bond, the van der Waals forces will be much stronger and fats are solids at room temperature. Lard for example has a high concentration of palmitic acid, a saturated chain of 15 carbon and has a melting point around 40°C.

Fat and oils will have another interesting property. The lack of -OH group or ions in their long carbon chain structures makes them non-polar and incapable to bond to polar molecules such as water.

Meaning they will be insoluble in water or “hydrophobic”. The best you can do is shake vigorously to form small droplets of oil dispersed in what is called an emulsion, but the two liquids will eventually separate.

So molecules like capsaicin will attach at one end to heat receptors in your mouth. But at the other end a long carbon chain makes them extremely hydrophobic explaining why water will have a hard time washing away or dissolving capsaicin in your mouth when you took a bite in the wrong pepper.

On the other end, milk is mostly water but it also contains lots of fats which will be able to dissolve that spicy molecule.

So now you know why the mouth gets hot with chillies, and also how to cool it back down again.

Forget about the water and reach for the alternatives, like milk, cream or, when you are old enough and in moderation, alcohol.

Understanding about the nature of fats and oils will not only get you through Higher chemistry, it will also stop you getting hot and bothered.

This was think four. Thanks for watching. 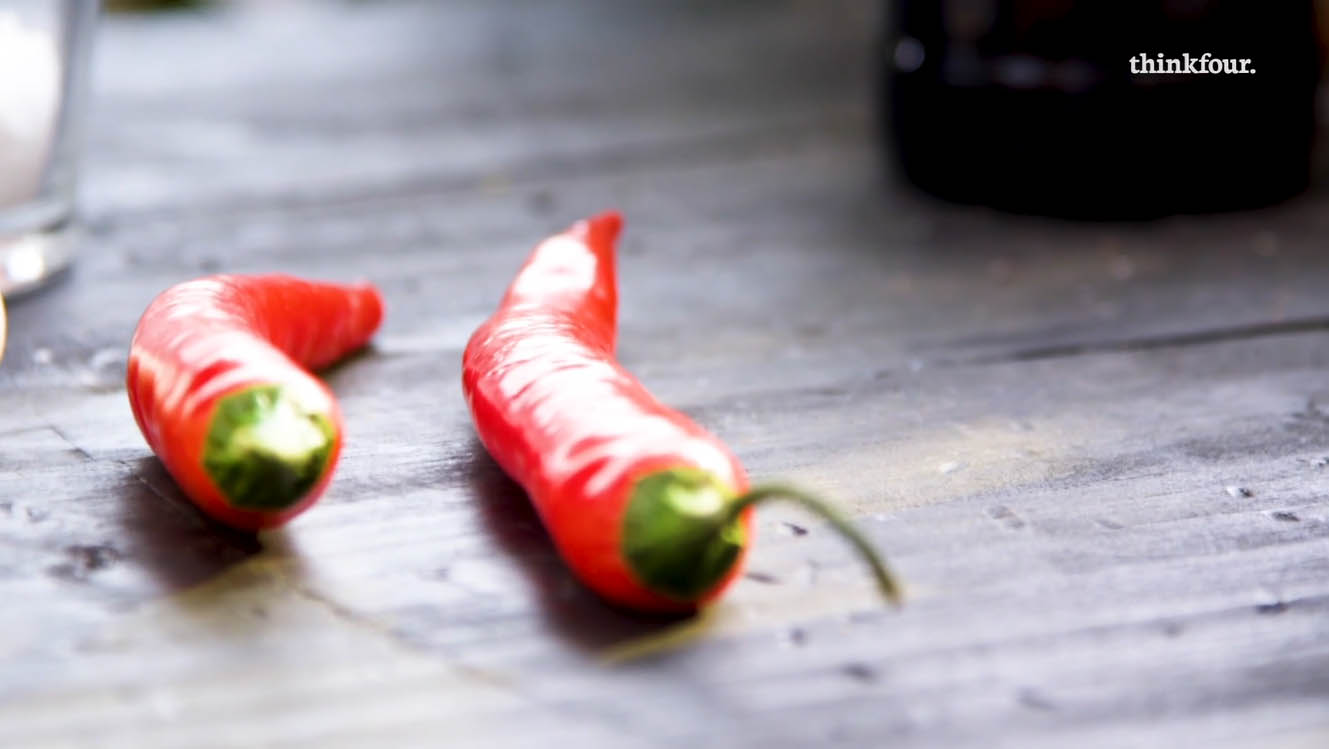