A few years ago, I had the amazing opportunity to visit Venezuela. It is an incredible country. It has its challenges, but it is the most beautiful place I have ever visited.

The Caribbean coast with its white sand, turquoise waters and blue sky is an amazing place to be.

But what really struck me is the heat from the Sun, it is fierce. I needed to protect my skin from the Sun and.. Well.. I didn’t. I got the worst sunburn ever, it took me days to recover and I really should’ve known better.

From an early age we are being told to put on suncream. But what makes the light from the Sun and more specifically the UV light so dangerous for our skin.

What happens at the molecular level that is so destructive?

So grab a pair of shades, your sunblock and let’s dive in.

Light is a spectrum. It goes from the lower energy radio waves, microwaves, infrared and visible light that won’t interact much with the structure of molecules. But past visible light, ultraviolet (or UV), x-rays and gamma rays are known as “ionising radiation”. This means that the particles of light (or photons) of these types of radiation can break bonds inside molecules. Lucky for us our atmosphere blocks most of these dangerous radiations but some UV light manages to get through to the ground.

On unprotected skin this bombardment can cause immediate sunburn but also the breakdown of collagen which can accelerate aging of the skin. In the long term UV light can damage our DNA which has been linked to skin cancers.

To prevent damaging the skin, a simple “shield” can be applied that we all know as sun cream, sunscreen, or sunblock. They will absorb or reflect the harmful UV light to prevent the catastrophic interaction between the high energy photons and the molecules in our skin.

So what exactly happens that is so dangerous? What horrific chemical reactions were happening as I was enjoying that Caribbean Sun?

When a UV photon interacts with a covalent bond, it has enough energy to break the bond apart. This results in atoms that have one unpaired electron. This atom, called a free radical, is highly reactive and is going to wreak havoc on anything it touches. Because of their high reactivity, they often react to produce more free radicals which leads to chain reactions.

FIRST step: Initiation
- The covalent bond is split in two by the UV photon, leaving each atom with an unpaired electron represented by a dot in this chemical reaction. Dividing ONE molecule leaves TWO highly reactive radicals
- We might think that this horrible scenario could be stopped if we left the sunlight but no. Once the reaction is initiated it can continue without any source of UV, long after exposure.

THIRD step: Termination
- This destructive chain reaction can only stop if a reaction occurs where no other free radical is produced. This can happen if two free radicals react with each other to combine their unpaired electrons to reform a covalent bond.
- Once all the free radicals have combined to form stable covalent bond and stable molecule, the reaction will stop. This is known as termination.

So next time, you’re out enjoying a beautiful sunny day, don’t make the same mistake - put on your best pair of sunglasses and a good layer of sunscreen because now you know!

This was Think Four. Thanks for watching. 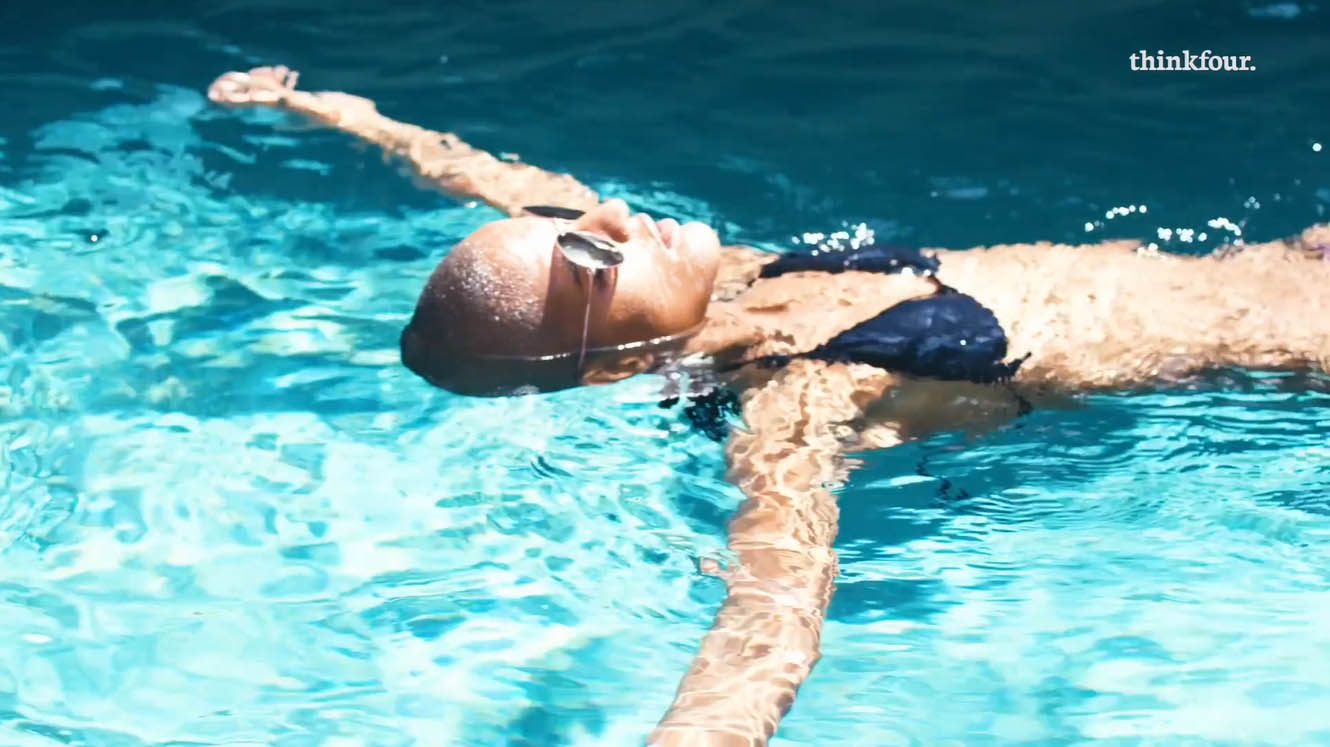