The Impact of the Great War on Scotland: Red Clydeside

90,000 Glaswegians assembled in George Square. They were demanding a 40-hour working week and were willing to strike for it.

The protest though quickly escalated. The Red flag was raised, flying in the wind across George Square. Police responded with baton charges; the Riot Act was read; the demonstrators used iron railings and bottles to protect themselves and the strike leaders were attacked by police as they left the City Chambers.

The government were worried.

Want to know what happens next?

This is Think Four.

Fearing a Bolshevik- style uprising, the Coalition government panicked. Historians have suggested that 12,000 English troops were brought in to restore order. The Scottish troops, stationed at Maryhill Barracks, were locked in fearing that they would sympathise with the strikers. Machine gun posts were set up across the city and tanks called on the streets of Glasgow.

Glasgow had gained a reputation of being the centre of socialism during the First World War, but was it now a hotbed for a Communist revolution?

Well, to begin with, it had only been 14 months since the Russian Revolution and the German Communist Revolution was still in progress.

There had also been earlier fears of Communism spreading in Glasgow. John Maclean, a revolutionary Marxist and ringleader, was appointed as the Russian Ambassador in Glasgow by the Bolsheviks. He had also been cheered through the streets on his release from prison for sedition.

The Clyde Workers Committee (CWC), who were one of the groups demanding a reduction in hours, were known for their militancy. One such example was on Christmas Day 1915. Lloyd George was given a speech to munition workers in Glasgow but was soon drowned out by the CWC singing the socialist anthem ‘The Red Flag’!

And one of the leaders of the rally at George Square, William Gallacher, who was arrested and sentenced to jail for his involvement, later became a Communist MP and a founding member of the Communist Party of Great Britain.

And the fact the Red flag was flown across the crowds at George Square seemed to seal the deal that this was indeed a Communist revolution.

Recent interpretations, however, suggest that the legend of Red Clydeside has been developed as a political drive for nationalist support and many of the events we have already discussed didn’t even happen.

One such event was the arrival of English troops to crush the revolution. Historian Barclay, however, argues that there was only one English Regiment based in Scotland at this time in Bridge of Allan. The rest, bar one other battalion, used at George Square were made up of Scottish troops.

It has been argued that although mass protesting was stopped by soldiers, the strike continued until 12th February as the soldiers did not interfere with the rights of men to withdraw labour, supporting the argument that it was never a rebellion, but a legitimate strike over working conditions.

Even Willie Gallacher, the leader I mentioned earlier, claimed that they were not seeking a revolution in January 1919, although he did say that in hindsight they should have been!

George ‘Freedom’ Square has always been used for political demonstrations. This was seen recently in the 2020 anti-racism demonstrations and the global climate protest in 2021, to name but a few.

But none have developed the same pull, romanticism or political debate as Red Clydeside. Was Glasgow fighting to destroy a Capitalist class-system which the English brutally put down or were they simply worried about housing and working conditions in a time of global uncertainty.

I will let you decide.

Thanks for watching. This was Thinkfour. 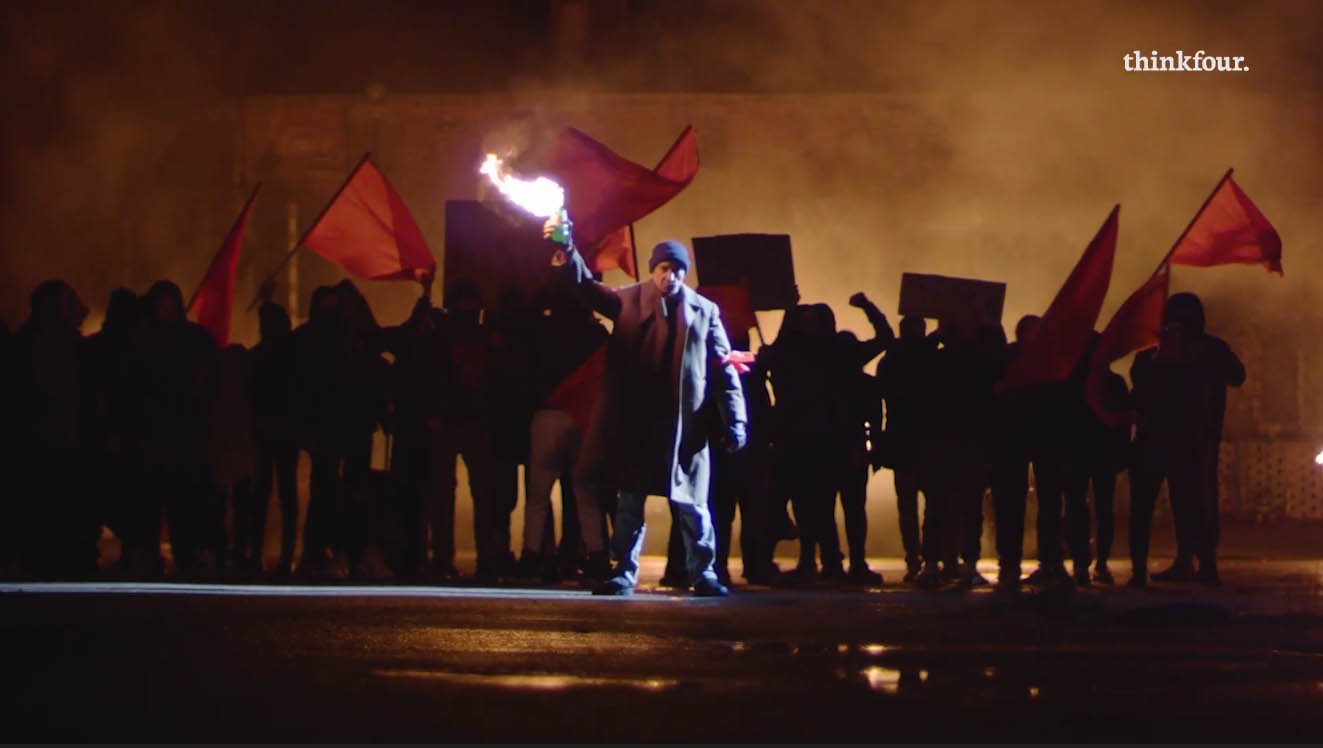